On the heels of new reports uncovering our short time window to prevent the most extreme impacts of climate change, we at Climate Dads are publishing a series of articles reviewing the basics of climate change. This post, republished from our friends at Crowdsourcing Sustainability, reminds us that we are far more powerful than we may think.

We’re on track to blow by the 2°C threshold of temperature increase at which climate change has been deemed catastrophic for humanity. To limit suffering and maximize human wellbeing we need to rapidly ramp up our efforts to transform into a sustainable society in order to minimize this temperature increase.

I’m sure you’re wondering, and rightfully so, how little ol’ you, party of one, could possibly make any sort of meaningful difference in this enormous problem. You’re just one person after all. There are now 7.6 billion people on our planet. If you’re not an elected official or a CEO you probably don’t have too much influence right? Does what you do really make any difference in the fight against climate change?

These are great questions. Lucky for us, our everyday actions really do make a difference in the fight against climate change.

The size of an individual’s footprint is mind-boggling

Although you’re just one person, the size of your carbon footprint (the amount of greenhouse gas emissions attributable to you) may surprise you. 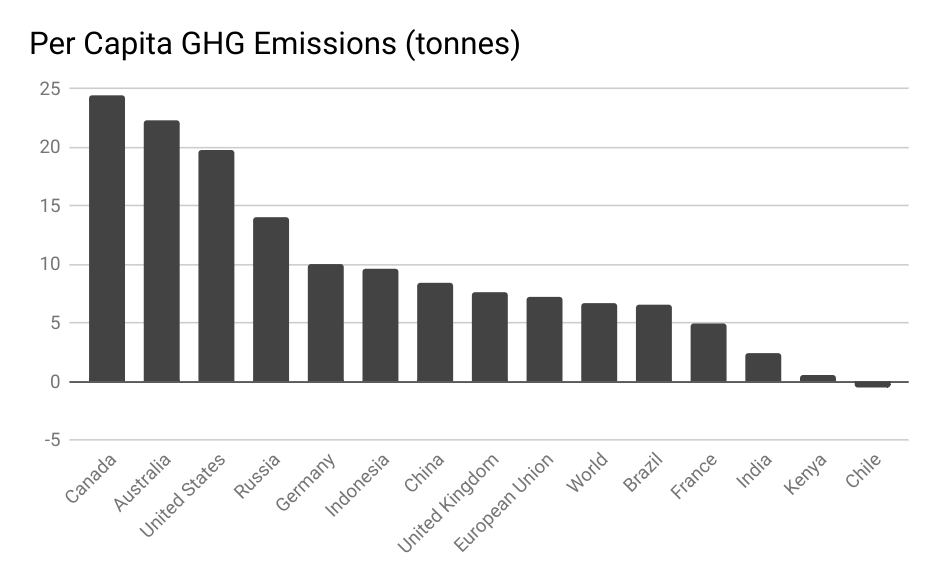 Made with World Resource Institute’s CAIT data from 2014. If your country isn’t listed or you’d like to see the full list of GHG emissions by country, click on the chart.

I’m guessing these numbers mean as much to you as they did to me initially…which was nothing really. Numbers this big are beyond our comprehension – so let’s look at it a different way.

Those 19 tonnes of greenhouse gases that the average US citizen emits each year take up enough space to fill the inside of three Statues of Liberty. And 1.5 years of emissions weigh as much as the Statue of Liberty. That’s 41,900 lbs or 19,000 kg of a gas. It’s also roughly equivalent to the weight of 12 cars or 50 horses.

That is an enormous amount of emissions for one person! To break it down even further, let’s see what this looks like on a day to day basis. The diagram below shows the volume of an individual’s daily greenhouse gas emissions for various countries.

To keep the temperature increase somewhat close to 2°C above pre-industrial times, the average footprint of everyone in the world needs to be approaching to 0 to 2 tonnes by 2050. Your contribution may be a small piece of the pie overall, but you alone can prevent many tonnes of GHGs from entering the atmosphere just by changing a few habits. By eliminating a quarter or half of your emissions, you could prevent hundreds of tonnes of GHGs from entering the atmosphere over the course of your life. Our impact over a lifetime really adds up. Think of how many Statues of Liberty that is!